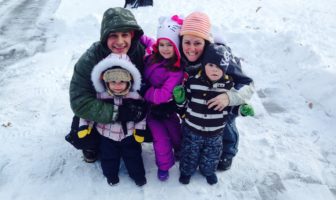 I assume that somewhere in the Irish and Finnish blood that flows through Tilly’s veins, there are remnants of DNA from a Viking or two. For fans of the show on the History Channel, Tilly would probably be the love child of Lagertha and Rollo if they made a baby.

On one hand, we have a hilarious, smart, endearing, unabashed, affectionate, and adorable little peanut. She (supposedly) behaves at her twice a week school and gets along with her classmates.

On one hand, we have a hilarious, smart, endearing, unabashed, affectionate, and adorable little peanut. She (supposedly) behaves at her twice a week school and gets along with her classmates. She rarely has any reluctance to speak with grown ups or kids alike. Her facial expressions and mannerisms are more like a seventeen year-old than a four year-old pre-schooler. She thinks and moves quickly on her feet. And she can make anyone laugh. The Tills loves leopard prints, sequins, kitty cats, and most any outfit with some kind of flair or pizzazz. Her taste is like a combination of Punky Brewster, Lady Gaga, and Cyndi Lauper.

A trend we’ve noticed lately that Tilly has taken to is a self-appointed role as the nickname creator. She is the only one I know who calls Greta, “Gret.” Officially, Greta dislikes it but I think she kinda digs it deep down inside. BFF Alysha is “Aleesh.” BFF Dillan is “Dilly.” I am Dadoo, which Gus has adopted and calls me now, and I love it when any of the kids use it. Nana is Nanny occasionally. And so on.

Her stamina for over-the-top tantrums is actually kind of impressive.

On the other hand, we have a child occasionally possessed by Lucifer. Her stamina for over-the-top tantrums is actually kind of impressive.On a bad day, Matilda has a hair trigger that activates the flip sesh. In other words, practically nothing will set her off. Not being able to wear a certain pair of pajamas because they’re in the washing machine. Not being allowed to go outdoors in the winter sans pants. Not being allowed to watch a show because it’s dinner time. No dessert. Basically, if she just hears the word “no."

Whatever the cause, the fuse gets lit at the initial confrontation. She is indignant at being denied what she wants. She pleads that we reconsider. The more we dig in, the more inflamed she becomes. Voices are raised. Feet are stomped. Sometimes THE WIFE and I maintain our cool. Sometimes, well, we kind of lose our f****** heads too. Next thing you know, voices are at a holler pitch. Doors are slammed. Ridiculous threats are issued on both sides. (“I am going to leave this family!” “Fine, go ahead! Here’s some bus fare.” Etc.)

The true sign of a complete meltdown is this crazy move that Tilly does where she is lying on the floor and basically executes what looks like a jack knife dive as she lies on her side. Except she does it at pace that makes her look like someone trying to do ab crunches in a crossfit competition. Or maybe a deleted scene from “The Exorcist.” It’s weird and funny and disturbing all at the same time.

Oh Tilly. She drives THE WIFE and me to our absolute limit and further. I’m ashamed at how badly I can bark back at her when she has pierced my (albeit thin) layer of calm patience. She possesses a degree of fiery insanity that I’ve never observed in another child.

And yet, when you get the happy and behaved version of Till-Tills, all you want to do is hold her in your arms to cuddle and kiss and squeeze. She is like a pet spider monkey who can scramble over any piece of furniture to plop herself into a lap. She also has an uncanny ability to spill any size drink no matter how many warnings you give. I swear she could find a way to spill one of those coffee mugs for boats that are like empty upside down flood light bulbs.

I think Matilda is yet another example of how youngest siblings get the shaft in the parental effort department. At six months old, Greta ate organic, free range, humanely raised, antibiotic-free baby carrots washed in imported Icelandic water that was hand ground into pulp and mixed with almond milk. As a snack. Meanwhile, Tilly was told that if she was hungry, she could go into the kitchen to pour herself some stale Fruit Loops and borderline spoiled chocolate milk.

Tilly’s crib had all of the residual bite marks of Greta and Gus-man on the gate. She gets Greta’s hand-me-down clothes with the pre-existing stains. Hell, this post is even a month later than the ones about her brother and sister. As a result of the neglect, it’s easy to see how we as parents contribute to her projecting an already loud voice louder, her already big personality bigger.

The other night, I was sitting on my bed reading the computer with my headphones on for tunes. Tilly scaled her way into the bed and cozied up right beside me. She asked me with her little lispy voice what I was doing as she pulled one of the phones off of my ear and onto hers. Then she instructed me to play some Katy Perry. Fearing the Viking and loving my cuddlebug, I queued up the “Roar” video for the umpteenth time in the last six months and just enjoyed the moment.

I suppose this is the part of the story where I just sigh and shrug my shoulders with a smile. My baby is one of a kind, that’s for sure. I wouldn’t trade her for the world. I think.

Originally posted on February 20, 2016 on http://www.waitingforbabyt.blogspot.com. 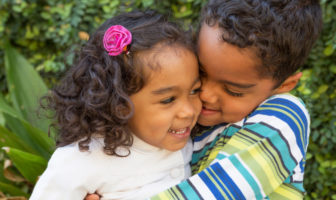 Helping Siblings of Children with Autism

This section offers suggestions to parents about ways to help the other children in the family cope gracefully and effectively with the experience of having a brother or sister with autism.

With the current baby formula shortage, #onetoughjob wants to offer ways to navigate through it. Times are tough, b… https://t.co/K8xLLCKoN7
about 15 hours ago