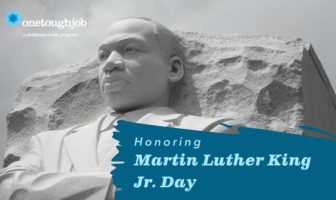 Welcome back and happy new year from all of us at One Tough Job. We hope you and your family stayed safe, physically distant, and socially close through the passing of the new year.

Here are some suggestions on how to spend this extra day off (three-day weekend, anyone?). Even if you’re still working on Monday, January 18th, any adult in your child’s life who’s supervising them can help integrate these ideas for the day.

Engage in acts of service

For many communities, MLK Day has become a day for acts of community service. Here at One Tough Job we’ve taken this approach before, so go ahead and check out 15 Acts of Service for Kids. You’ll notice that many of the suggestions are social-distancing-friendly, such as:

This is also a great chance to discuss with your children “what does helping others mean to you?” and be curious about their responses. Encourage them to think about the difference between helping a person or community based on what we think they need versus helping out a person or community based on what they have said they need. For older children, talk to them about autonomy, and for younger children, talk conceptually about someone asking them how they feel and what they want – do they feel good? Happy? Listened to? How does it feel when someone does not listen to what they want?

Often when talking about Martin Luther King Jr, the stories stop at his I Have A Dream speech and the March on Washington. However, Dr. King spent a lifetime fighting for civil rights and justice, and his advocacy touched on many areas.

If your child has already learned about the resistance Martin Luther King Jr faced, this is a great entry point to talking about standing up for what’s right. What does it feel like to stand up to injustice, even if it means facing resistance or being unpopular? Ask your child what helps them feel empowered to stand up to injustice and anti-Blackness.

MLK wasn’t just an advocate for the rights of Black Americans in racial justice: he also stood in picket lines for workers’ rights and protested against the American War in Viet-Nam. Older children can read this Smithsonian article about how much resistance MLK faced in both areas. Talk to your child about how fighting multiple kinds of injustice is necessary. This can be an exercise in perspective: when we stand up to one injustice, what other fights are linked? How can we link together our struggles in better solidarity? Is there anyone we’re accidentally leaving out, and if so, can we include them?

Many of us learned about Martin Luther King Jr within the United States context, with little connection to other events. But we can help our children understand what else was going on in the United States and the world during MLK’s lifetime. Do you and your child recognize these figures who were alive at the same time as MLK?

Did you know April is Stress Awareness Month? We know that the past year has been nothing but stressful, but with t… https://t.co/EMyp2LmJmV
1 day ago

Spring break is right around the corner! If you’re looking for ways to spend your break safely from the comfort of… https://t.co/beA0vZIqxP
about 3 days ago

“A grandparent’s love will never get old,” and a healthy relationship with grandparents enhances your child’s upbri… https://t.co/SKA8Vo8Xyr
about 4 days ago